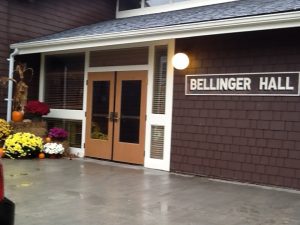 A new band season, and for some NHBT players, another opportunity to enjoy music camp.

The New Horizons Music Camp at Chautauqua, New York opened on Sunday, September 23 at the Bellinger Hall Retreat Centre. The four days of classes included large and small ensembles and sectional rehearsals. On Wednesday evening, the ensembles performed for the other campers. The closing day featured a morning concert.

Joanne Laplante (trombone) and her partner, Holly Price, (bassoon), were among the NHBT members who attended. Both are in the Thursday Symphonic Band.

Joanne says the quality of instruction and playing were fantastic.

“The one thing that stands out for me is the discipline of the group. Despite

the large number of players in the advanced band (about 85), people were

watching the conductor. Hardly anyone ever played or talked over the

instructors, and we stopped when the conductor stopped. It was altogether a

For Joanne and Holly, it was the second New Horizons camp experience at Chautauqua. Joanne says this September’s event was just as thrilling as their previous visit in 2015.

The classes were run by about a dozen faculty members, including Roy Ernst, who launched the first New Horizons band almost 30 years ago in Rochester, New York.